Right at the start of Meat Street (depending on which direction you're coming from, obviously) is Sticks N Sushi, a Danish chain with restaurants in London and now Cambridge. Yes, Danish. Why the hell not? I'm half Japanese and half Scottish; I'm all for fusion. It's a chain but it's not really a chain. A very short walk down the road leads to two other well known sushi chains, but I wouldn't consider them to be Sticks N Sushi's competitors. I see this as something higher end, a proper restaurant you'd go to for lovely drinks and pretty food.

Sticks N Sushi invited Cambridge area bloggers and writers to come to "preview" lunches and dinners a few days before they officially open on May 7. I took my friend Katie with me, who is my go-to person when I need an opinion on good restaurant food. I think she's eaten at every restaurant on my London wish list.

It was a gloriously sunny Friday, I bypassed the office sausage and bacon rolls that morning in anticipation of a big lunch, and I was in a happy and very hungry mood. We were immediately greeted by several smiling faces and taken to our seats at the bar. Our waiter told us that we would be served a set menu, but gave us the extensive "photo album" menu to look at for future reference. The menu is huge, with photos - 162 of them, to be precise - that helps people like me make food decisions. (I tend to skip over recipes that don't have photos. I'm kind of basic that way.) We started with drinks: a matcha tea for Katie and a lemon and ginger fizz for me. I was pleasantly surprised that the fizz wasn't sweet, and on such a hot day (for England), it was incredibly refreshing. 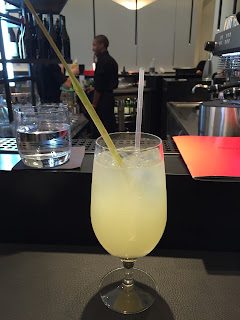 "Ebi bites" came out first, a sort of tempura prawn dish that was crispy and light. It's actually not at all tempura, I just used that word because it's on the menu. I'm not sure what the coating was, but it was almost like puffed rice. Whatever it was, we ate it in about 15 seconds and it was good. 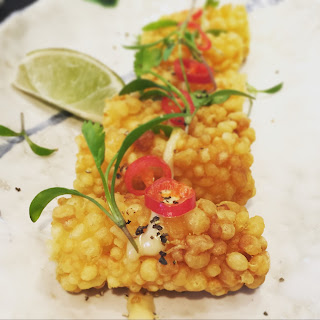 The sushi was the focus for me, and my expectations were high. Cambridge needs decent sushi. We have Japas Sushi which is the best by far, but you go there to fill a sushi-shaped hole or get takeaway. You don't go there to linger over cocktails. Otherwise, we have chains and one of them is good (fresh, nice variety, not too expensive, great for food on the go) and the other is Yo Sushi. All I will say on the topic is that I only go there when my children clamour for it, and they only go there because food goes by on a conveyor belt and you can push a button to get more food. So when rows and rows of beautiful sushi arrived on two long plates, we both let out a little "Oooooh." 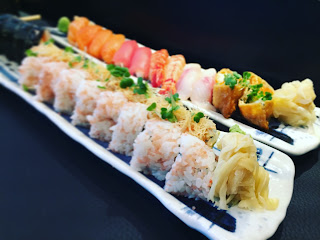 We had a combination of nigiri (fish on rice balls) and rolls. We were given a good variety to try, ranging from the more traditional (shake or salmon nigiri) to the more Westernised versions of rolls (spicy tuna with avocado.) The fish and rice were beautifully fresh, and the rice was seasoned well. Some varieties were more interesting than others, and you need to adjust your excitement levels accordingly. Nothing involving salmon and cream cheese is ever going to be described as "an explosion of flavour" but we liked them anyway. We decided to be sensible (this is a rare thing for me) and take about 1/3 of the sushi home and save room for the sticks.

We had three stick varieties between the two of us, which was good because we were starting to enter Man Vs Food territory with all of the sushi. We had black cod, asparagus in bacon, and as they must have got word about me and my love of bacon ahead of time, scallops in pancetta.  All cooked perfectly and hooray, double bacon! 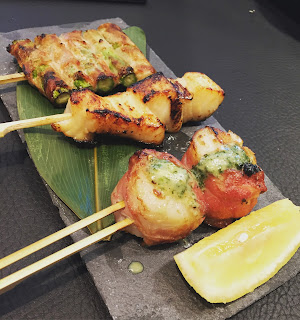 I don't normally have dessert at Asian restaurants (mostly because we don't tend to do desserts all that well and I've stuffed myself with dumplings and/or rice by that point) but we fit in two small dishes of yuzu sorbet and vanilla ice cream, which were very welcome on a warm day. 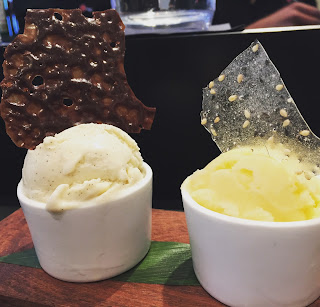 The waiter described the provenance of all of the fish on our plates and we had a chat with one of the managers about it after our meal. This is an important factor at this restaurant and it's reflected in the taste - and price. This is the cost of quality, fresh, sushi grade fish. The problem is, Cambridge is used to supermarket and chain sushi that comes cheap. Chewy unseasoned rice topped with a wodge of tasteless fish, but it's all some people know. Even I find it difficult to fathom paying £13 for two pieces of sushi, despite knowing what I'm paying for. If it's a special occasion or we're in a large group (I love meals with lots of sharing dishes), I would be happy to come back here.

Will the people of Cambridge pay a premium for high end food or will this get dismissed as "London prices"? Sticks N Sushi is in an area right next to a large mall and across from a theatre, and many walk-ins will be looking for something quick and cheap. I think as long as you understand what you're in for, you're good to go. Given the demographics of central Cambridge (tourists, students, locals on a lunch break or looking to grab a bite before heading out for the evening), I would like to see some set menu deals, or prix fixe because it sounds a lot nicer in French. There are some nice looking sharing plates and set menus on there already, but the price still may deter some people.

Disclaimer: Look, I've been blogging since 1999 (on a Tripod site that might still exist somewhere in cyberspace) and we never had to do this nonsense back then. You'd just go somewhere and if you liked it, you might write about it on your blog. These days, you've got to put a disclaimer at the end of anything resembling a review or nobody will simply trust that you went somewhere and had a good time. Anyway, Sticks N Sushi picked up the bill and we didn't choose our own dishes. Nobody said "Write a good review or else we'll tell everyone that you're an asshole and make you pay for your meal." We genuinely liked it. Okay? Okay.
at 11:40 am