a tale of three recipes

I found myself with an excuse to try out three recipes for a charity yard sale. I always enjoy baking for something or someone else because a) I get to make something sweetly decadent in our usually sugar-free house and b) it won't stay in my house and therefore I won't scarf the whole batch down in front of the television with a bottle of Baileys.

When I saw the recipe for bakewell slices/squares from my friend Annalisa Barbieri, I knew this one was going in the oven as soon as I found an excuse. I adore bakewell tarts - pastry crust spread with a layer of jam, topped with an airy almondy layer and icing - and loved the idea of doing them in bar form. Her recipe is very easy to follow (don't get scared off by the thought of making the pastry layer) and the accompanying text is fabulous. All recipes should be written like this; it's like having your best friend next to you talking you through the process rather than the intimidating formal instructions often given in books. (I think authors like Nigella Lawson and Nigel Slater are exceptions to this, probably because they are food writers rather than chefs.)

They turned out nicely, easily, and weren't overly sweet as you often find with commercially-produced bakewell tarts. It's only now that I notice how different mine look to Annalisa's. My pastry isn't crumbly and the almond layer looks far more dense. I've been eyeing my scale suspiciously after a few baking mishaps lately, so I think I may have added a bit too much butter to both the pastry and filling. Or maybe I just suck at pastry. No matter, they taste marvellous and hold together brilliantly as squares. Next time, I'll probably make a cherry compote type of thing like Annalisa made rather than the jam because it soaked into the pastry and almost wasn't a visible layer in the end.

I was looking for something easy and that would make a vast quantity, so who better to consult than the queen of excess herself, Ina Garten? I love Ina. I wish Ina was my auntie and we could stay at her house in the Hamptons every summer. She would bring us trays of muffins, pancakes, fritattas, and carafes of coffee in the morning, and ply us with butter-filled delights for the remainder of the day. Her gay friends would come over and we'd sit on the beach and laugh about other Food Network chefs while we sip cocktails by the pitcher. Where was I? Oh yes, brownies. Lots of them. I remember seeing her make her Outrageous Brownies on television, and thinking "Why the hell does she always cook enough to feed 50 people?" Thankfully, this came in handy for the yard sale. They are, as you'd expect, everything you'd want in a proper American brownie: an enormous amount of rich chocolate, a slightly crisp outer layer, and a fudgey, almost undercooked middle. They are very similar to the recipe in Nigella Lawson's How to be a Domestic Goddess, with the addition of instant coffee granules. I omit nuts from any brownie recipe I make, only because I cannot stand nuts with cake. I don't want anything to interrupt my enjoyment of pure chocolate loveliness, and this includes children, the telephone ringing, people at my door attempting to convert me to their religion, and nuts.

These brownies are very easy to make and apart from the lack of nuts, the only other change I made was using 72% chocolate (Green & Blacks) only instead of a combination of semisweet and bitter. Follow Nigella's recipe if you want to make a reasonable quantity, and follow this one if you want to feed a small nation.

The final baked good, which didn't make it to the yard sale (reasons to follow), were World Peace Cookies from the beautifully photographed and wonderfully written Smitten Kitchen blog. These are what I would call "grown up cookies". They're very light, crispy (comparable to a French sable), and deeply chocolaty without much sweetness. A large cold glass of milk is a must with these, or a good cup of tea.

As I mentioned earlier, I'm deeply suspicious of my scale at the moment, which increased after I made this dough. Most of the comments following this recipe complained about the crumbly dough, and my friend Helen who recommended the recipe to me also mentioned taking a bit of flour out if it didn't hold together for me. So when it rolled up easily and didn't fall apart when slicing it, I knew something had gone amok. I did a test run of only three cookies (I'm not a confident baker, usually for good reasons) and they melted into little black burned pools of chocolate and butter. I sliced off three more, thicker this time, and only cooked them for half the given time, watching them like a hawk. The photo on the left is the result, so not a bad attempt over all. Not having time to redo the dough before the sale, they will remain on my "to do" list until next time.

I am, somewhat alarmingly, becoming known as "the lady who makes cakes". Obviously this is entirely my fault, due to blog posts like this and various photos I've uploaded to Facebook. The thing is, I don't particularly like to bake. It's too specific and scientific, with no room to improvise - unless you're a confident baker, which I'm not. I feel a bit of a fraud when people compliment my baking talents because in my mind, I've simply found a good recipe that works. When I put together a savoury dish, I do feel I can claim it as my own. I might use a recipe for inspiration or get an idea from a cooking programme, but I tend to make things up as I go along and the dishes evolve over time. I don't mind adding a bit of this and that, omitting something, substituting another, adapting ingredients, or combining ideas from several recipes. When it comes to baking, I follow the recipe to the letter. I have to read and re-read the recipe several times, because I almost always miss a vital step. It's not intuitive to me, so I don't "know" what to do unless I've made it a million times before.

I am a lady who likes to eat cake, for sure. When I bake and it turns out well, I'm always surprised and pleased, which is why photos get posted and recipes get blogged. In my heart of hearts, I would much rather let someone else do the baking, preferably in a cafe setting that serves great coffee.
at 11:57 am 3 comments: 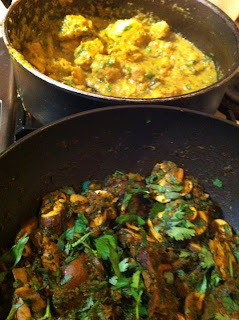 I was watching "Saturday Kitchen" a while ago, and the Hairy Bikers were guests. They'd just finished filming a series in India and demonstrated how to make a South Indian prawn curry. It looked easy and tasty, and I gave it a go - it's since become one of our favourites. I normally make it with prawns but sometimes I add other fish (scallops, monkfish, salmon, etc - anything firm). I also make it with chicken thigh filets, which is what I did this time. You could use chicken breasts if you're not keen on thighs, but brown meat has infinitely more flavour and stays much more moist, and the caloric difference isn't very substantial. Here's the recipe as I made it last night:

Method:
The mushroom dish was based on this curry recipe from the fantastic Mamta's Kitchen site (my "go to" site for anything Indian.) We're off the peas at the moment (too carby), so I substituted spinach which worked really well. Otherwise, I mostly followed the recipe as written (I used only 1tbsp of oil.)