*(still gets my vote for Best Album Title Ever) 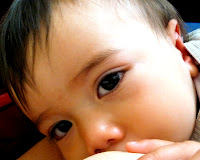 It's National Breastfeeding Awareness Week in my neck of the woods, which is a Department of Health initiative that aims to promote and support breastfeeding. I recently completed a training course to become a breastfeeding peer supporter, to lend mums a sympathetic ear and encouragement. Although I haven't managed to get my disorganised self a regular gig as a supporter yet, I did want to advertise the fact that this sort of thing exists - and may exist in your area, should you need it.

I didn't read anything about breastfeeding before I had Jack. I just assumed it would happen easily, and didn't really involve more than getting your boobs out and popping the baby on. I never thought about all the anxieties, mostly irrational, about my ability to feed my baby. Most things simply didn't occur to me until I actually breastfed.

I got off to a bad start with an unexpected c-section accompanied by a 10cm incision. Drugged, exhausted, somewhat in a state of shock, I suddenly had a newborn baby and holy crap, he wants food and I'm his only means of nutrition. I couldn't position him comfortably, and balanced him precariously on a nursing pillow while attempting to avoid putting pressure on my scar. He doesn't just latch on and feed; he sucks for a minute and pulls off screaming. And by the gods, what the HELL is this awful abdominal pain I'm feeling whenever he feeds? I'm in so much pain, I'm only on paracetamol (because morphine makes me want to throw up), and I can't sleep because I'm stuck in a hospital ward with five other mothers and five screamy babies. In the middle of the night, Jack keeps waking up to feed and I have no idea how to get him latched on. The midwives are so overworked that all they can do is come to my bed, plug Jack in, and quickly dash off to the next person. I don't know how they got him latched on and I'm terrified to move in case he detaches himself and I need to ring that goddamn bell again. In the days that follow, he continues to latch on (painfully) in very small spurts every couple of hours, screaming between feeds. I don't know what I'm doing wrong and I don't know who I can speak to about it. Whenever Jack cried for a feed, I literally felt ill knowing that I'd have to endure a toe-curling latch and yet another unsuccessful feed. I watched the clock, horrified that two hours had passed so quickly, knowing that another feed was coming.

At two weeks, a health visitor (relocated now, thankfully), advised that I "top up" with formula. I gave Jack his first bottle of formula and it broke my heart. I rang Paul at work sobbing; I couldn't do something as basic as breastfeed, and the guilt was incredible. Supplementing, of course, led to supply issues and by two months, it became necessary to stop breastfeeding completely. Not having to breastfeed any more was actually a relief.

When I got pregnant with Mia, I was determined to learn as much as I could about breastfeeding and spoke to my midwife about needing support, especially in the first weeks. I went over everything that happened with Jack and chatted with mums in "real life" and online. I felt so much more prepared, but more importantly, I felt like I had an arsenal of information and support. Mia's birth was infinitely easier than Jack's, with no major recovery issues, and this undoubtedly made a difference to breastfeeding this time around. Also, not having that first time mum learning curve helped. I was more confident and trusted my instincts. I breastfed Mia until she self-weaned at 19 months (when I was pregnant with Isla, and I think my supply had dipped as Mia kept saying "Gone!" every time she latched on.) Isla is almost one, and breastfeeding has gone swimmingly since the beginning. And for this, I'm very grateful. And very proud.

This is why I jumped at the opportunity when the health visitor suggested that I take a course to become a peer supporter. I knew what it was like to have no one to speak to and to have no confidence in my own abilities, and I knew what it was like to formula feed. I hoped that this would help me give unbiased support and that being a "been there, done that" mum might make mums who are struggling feel a little bit more comfortable talking to me.

So if you're one of the struggling mums, or you have a question, a doubt, a worry, or just want to get together with another breastfeeding mum, please do get in touch with your midwife or health visitor and ask if there are peer supporters in your area. Additionally, you can ring the National Breastfeeding Helpline on 0300 100 0212 or the NCT breastfeeding helpline on 0300 330 0771 any time of day or night.
at 4:08 pm 3 comments:

I get incredibly enthusiastic about all sorts of things. I discover a hobby or come up with ideas that will make my life more organised, thrilling, and infinitely more interesting. I am fantastic at starting projects; I'm rubbish at actually completing any.

I am going to name and shame all of the unfinished business in my life at this point in time, with the hope that it will motivate me to get everything most of it something done. Eventually.


Was that supposed to make me feel better? My tummy hurts now. I'd better make another latte.
at 10:59 am 4 comments: