Whoa. I haven't written anything on this blog since 2019. Which was actually a really eventful year thankfully, because the two years that followed have been CACA. Well, that's pandemic life for you.

2019 was an awesome year to have a milestone birthday. It was my (and Paul's) 50th birthday, and I totally milked it. It's like I had foresight into the Year of Doing Absolutely Naff All that was 2020. First, we redid our bathroom. No wait, hear me out. It was 17 years coming. SEVENTEEN. I lived with a blue bathroom suite and painted tiles, inspired by something I saw on "Changing Rooms" that was only "temporary" because we were totally going to redo the bathroom right after we moved in. Oh how we laughed. I mean, look at the difference: 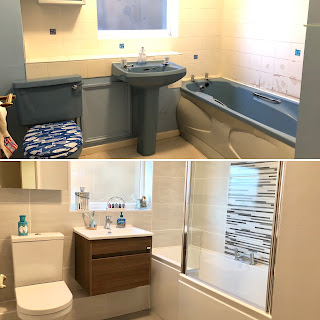 Exciting, eh? Honestly, it felt like moving into a hotel.

Then I turned 50, and decided that because my 40th was pretty tame (I was five months pregnant with Isla), I would go all out for my 50th. It started with a surprise dinner with a bunch of lovely friends and family at the Old Bridge. I had another celebration with outdoor hot tubbing at Paus, and an amazing meal at home catered by my friend Paola (of Romano's). In April, we flew to California to see family and also to do all the awesome southern Californian things we love to do. It mostly involved tacos.

And then the very best thing happened. My friend Jenny's dog had a litter of puppies. When they were born, she put a photo on Facebook and I burst into tears because I was so sad that we didn't have a dog anymore. So that's how Ted came to be, and he came home with us that June.

But before that, I went to Tuscany with Katie, where we ate the best food, drank the best wine, and barely paid anything for it because that's how things work in the part of Tuscany we were staying in. Just incredible.

My mom turned 70 in June and I decided that I couldn't wait until our visit the following year (see? I'm psychic), and surprised her by flying in for her birthday. Just having lost Paul's dad the year before, I didn't want to miss one single milestone with her. And so I went, and it was awesome.

The week after I came home, it was party time at...where else?...the Bridge. This time we hired out the function rooms and terrace, and had an absolute blast. Nobody knows how much they had to drink that night. Nobody.

Finally it was Paul's turn to have a birthday, so I whisked him up to Edinburgh for the weekend to meet up with our very dear friends Russ and Debs. And only now do I appreciate how incredibly special this was.

And in between all this, friends and family from Canada came to visit, we saw some fantastic West End shows (including the astoundingly good "Fleabag" performance), ate a lot of very nice meals, a lovely friend got married (more Bridge shenanigans ensued), we had a 90s themed Halloween party, I got a Tesla Model 3, and then the year was done.

Of course you know what happened next: two years of not doing a lot. (But feeling like life was A Lot.) I am so, so grateful that 2019 was such a great year. I have zero regrets about going completely overboard for my birthday. I think that was the theme for the year: grab life by the nads and run with it. And we ran.